If you have (like me) recently taken a flight from Heathrow airport (or been to IKEA for that matter), you might have noticed the smiley feedback panels. They ask you for your views on how your customer experience has been – they are placed at strategic points, for instance just after security checks at Heathrow or at the exit of IKEA. I’ve also seen them in toilets asking customers for their satisfaction with cleanliness, and even UCL cafeterias are now fitted with them. With a simple push of a button you can leave feedback for the operators and providers of the spaces: green smiley faces for happy, red grumpy faces for unhappy (typically with two options in between). 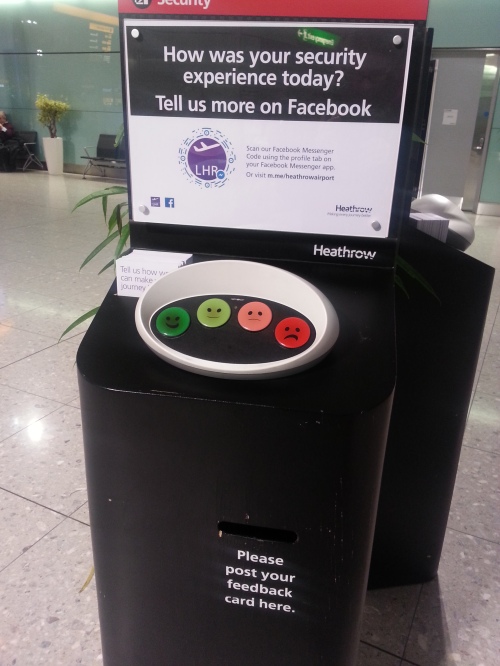 What is so intriguing about them is their ease of use. Feedback done in under a second. I also found it weirdly satisfying to push that button, so if you’ve waited for hours (at least that’s what it might have felt like at security or the IKEA cashier…), it gives you the feeling you’ve done something to vent the anger at a rubbish experience. Or, if the security people have gone the extra mile, it’s a bit like patting them on the back and saying thank you.

Why am I going on about this at great length? I think it is an interesting example of collecting data on user experience and satisfaction in order to take actions and improve the situation if needed.

In our workplaces, we are strangely detached from this immediate feedback loop. Most of us are in the office every day, but we’re not normally asked for our opinion. Even if we’re asked, this is usually in the form of an annual engagement survey from HR; your organisation might have signed up to the Gallup Institute questionnaire; or you might be queried by workplace consultants, if an office move is on the horizon. Often this type of engagement is best described as ‘death by survey’. I’ve completed dozens and dozens of those surveys (also because I believe in data and want to help those collecting the data), but let’s be honest – how often have you thought (after screen 13 and still only a half-way done progress bar) that you couldn’t care less anymore? This effect is called survey fatigue and is a real issue for researchers, who battle with low response rates and low quality data (once people just press any button to be finished). Of course, this is an amalgamation of a lot of phenomena: everyone is asking us for our views (retailers, service providers, you name it), it has become a lot easier for everyone to create a survey (survey monkey, google docs, and even on twitter), and organisations are becoming increasingly data hungry, asking for dozens or sometimes even hundreds of items at a time.

Of course the question arises whether smiley terminals collect robust data. What if people use them in unexpected ways, for instance children pressing multiple buttons at random (which clearly happens as I can report from own experience of travelling with my children…). One of the suppliers of feedback terminals, Happy or Not, state that their system has an in-built misuse protection that filters ‘unwanted inputs’. I’m not exactly sure how that works (possibly via ignoring responses given too rapidly one after the other?), but you might also argue that a few random answers do not matter in the light of a big amount of data.

So can we learn from airports and retailers and devise feedback systems that are quick, easy and fun to use and also collect data on the go rather than checking in on users only in annual engagement exercises? WeWork seem to be on the task with their rating app of spaces (e.g. a conference room), but this should be something for everyone, in every single office, and not just a few co-working aficionados.

We will definitely explore this idea of rapid feedback further to see how we could make this work in the workplace. Relevant feedback could not only include the typical satisfaction type questions (“How satisfied are you with…”), but possibly also preferences for certain environments or spatial designs; or judgments on how well the office supports various activities (walking, communication, concentration, quiet work, exchange of ideas). Once you start to think about it, many things come to mind, but as always the challenge lies in how to keep it simple (for users). And fun of course.