A recent post on workplaceinsight, an online publication on the design and management of workplaces, which featured the new workplace design of management consultants BCG, got us thinking about the role of science in the workplace. The article was subtitled “Pushing the art and science of workplace design”. It featured attractive pictures of the new office, and talked about the fact that the physical workspace is becoming recognised by business leaders as “a tool in business performance and competitive advantage”. It also referenced the Leesman survey which was used to assess views of staff on the pre-occupancy workplace, something that the client, BCG, was apparently keen to listen to.

In fact, Leesman CEO Tim Oldman is quoted in the article as saying:

“The office layout proves that BCG is more concerned about people working effectively together, rather than achieving the highest occupational density.”

So far, so good. The view that the physical design and layout of a workplace should not just be considered as cost factor, but as a lever to improve staff satisfaction, increase retention, foster collaboration and ultimately productivity is gaining traction. The recently published Stoddart Review is arguing for exactly that and publications such as ‘Don’t Worry About the Rent‘ are speaking the same language.

So where is the science that the article promises? The fact that business leaders are recognising a new hot topic is not science. The fact that a business is engaged in a workplace staff survey is data collection, but we would argue not science per se. The fact that it is big data, that can be benchmarked against 200,000+ other employees who have also completed the survey, in our view doesn’t make it science either.

So what is science, and how does it apply to the world of workplace? A simple google search brought up the following definition, which is a useful starting point: 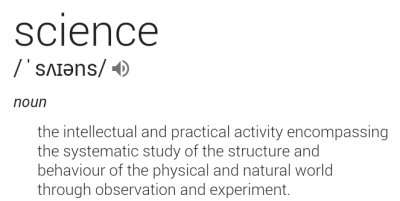 Therefore, science is systematic. It aims to understand the world. And it does so through some sort of methods (‘observation and experiment’). This definition didn’t quite feel all encompassing enough to usefully distinguish science from other forms of intellectual activity (e.g. a good survey, or an intelligent consultancy offer). After digging a bit deeper, we’ve found the following definition of science from the good people at the Science Council. Here it goes:

Science is the pursuit and application of knowledge and understanding of the natural and social world following a systematic methodology based on evidence.

They go on to define what scientific methodology entails and list the following characteristics:

By this definition there is a lot more to science than just data although data is a fundamental part of it. The BCG case study therefore seems to fall short of being scientific in a number of ways: although data is generated (through the Leesman Index), no attempts seem to have been made to ‘establish general rules’. No hypotheses seem to have been tested. Instead the value of the workplace to the business was assumed from the start and the data collected did not appear to contribute to that line of reasoning. Repetition could be argued to be covered by the fact that the Leesman questions are repeatedly used in different scenarios, but generally speaking, they measure employee satisfaction. Verification and testing does not seem to be part of the process. Critical analysis is possibly the criterion where science and applied research in consultancy differ most. Typically, these types of surveys are used to underline a certain proposition, but not envisaged as something that is allowed to be falsified or critiqued. The point on peer review and assessment is also a crucial one, since science needs sharing and making results public. Having your own views challenged is part of the scientific process and often improves thinking and understanding.

Don’t get this wrong – Leesman and other consultancy tools have their place. And of course the article we have seen may well not be telling the whole story of what really went on in this project. What we are challenging though, is the labelling of anything that simply includes data as ‘science’. Gathering data does not of itself mean a better outcome – it is a whole process of matching research questions to data collection to analysis and interpretation in order to further real understanding of the complex effects of workplace design. This is what we would call science.

So in summary, scientific thinking in workplace design is crucial to real understanding. In a field where pseudo-science is rife and some consultants promise immediate gratification as a panacea to all workplace related woes, we find it important to ask critical questions, to keep an open mind, to remain curious, to welcome the unexpected and to challenge the status quo. Scientific rigour is hard work, but we believe it pays off.

One thought on “Science in the workplace”