Sight is one of our most important senses. As humans we navigate the world based on what we see. This is why the experience of visibility – what you can see, who you can see and how easy it is for you to see others is of crucial importance in workplace design. But how could you analyse and assess the qualities of an office based on visibility? At brainybirdz we are using a scientifically grounded method called visibility graph analysis (VGA), which is based on the theory of Space Syntax in order to understand how an office is likely to function.

We were recently asked by the Danish architectural practice ERIK to evaluate an office building for them and want to share some of our insights and how the analysis helped in taking decisions in workplace design.

Let’s look at how the analysis works first. All we needed was a floor plan of the office. We never visited the building, never spoke to the occupants and we didn’t ask the architects (who knew the building) for their insights either. The analysis works purely with geometric properties of the plan. We were interested in finding how the building as a whole is connected, or how segregated different areas are. The modelling (executed in the analysis software depthmapX) assumes standing height for visibility, so all furniture was disregarded. Solid partitions and closed doors were included as obstacles to visibility, but glass was rendered as see through.

First of all, we analysed local patterns of visibility, so that means, what you can see from specific vantage points. Below is an example of the area you could see from a chosen point, which is also called an isovist.

The modelling then places a regular grid of vantage points across the floor plan and assesses how large the relevant visible areas are. A metric called connectivity is calculated, which is simply the count of all directly visible points (or pixels) from any given starting point. The resulting visualisation shows larger areas highlighted in warmer colours (such as red, orange and yellow) and smaller areas in cooler colours (green, turquoise and blue). 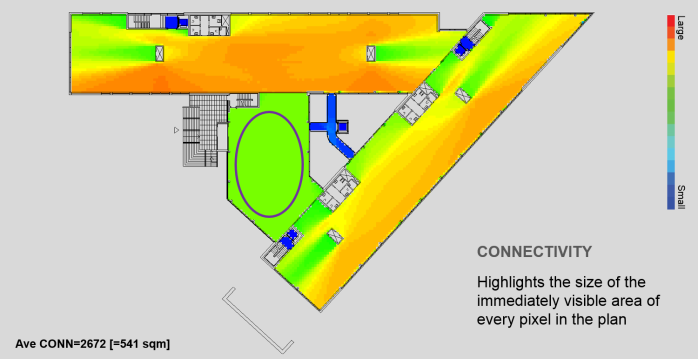 Ground floor of the office building

This immediately highlighted an issue with the ground floor of the four-storey office building: when you enter the building, the directly visible area is relatively small (as shown in green, marked up by purple oval). Therefore you don’t get any sense of activities going on in the building; you don’t know what else is there; and you don’t know where to go next. Both horizontal and vertical movement paths are hidden. This means the building will not be easy to navigate and find your way around.

The second type of analysis we ran is a fully connected visibility graph, which highlights global patterns of visibility. With this we don’t just look at the size of the immediately visually accessible area, but ask how many isovists it takes until you’ve seen everything. Again, imagine you start from a single vantage point (shown as a white circle below) – we’ve chosen one of the staircases as the place you want to start. All immediately visible areas are shown in red – this is just the small landing of the staircase. Once you open the door to the open plan office space and step outside, you can see a larger area, shown in orange. Now imagine walking through all the orange spaces – everything you see from there is yellow, so is one step further away. From there, you can see the light green spaces and so on. Each step of visibility is like looking around the corner. If you run this analysis systematically from every starting point in a grid, you can calculate average path length (also called mean depth). A mean depth value of 4 for example means you have to look around the corner four times from this place until you’ve seen everything there is.

If we evaluate average path lengths for the whole building, and again use the same colour scheme from red to blue (red / orange / yellow for shorter paths and green / turquoise / blue for longer paths), we can see how the building is visually connected as a whole (see below).

The average path length of 5.66 means that on average you have to look around the corner 5-6 times to see the whole building. This is reasonable for a building of this size and complexity, but the analysis highlighted other important points:

On the whole our analysis suggested that the building presents several challenges.

To highlight what could be done with the building we undertook a ‘what if’ simulation. We took out the barriers between the wings to see the difference it would make in connecting people and allowing staff to see others more easily. The effect is quite stark as can be seen in the visualisation below.

The building now connects much more widely and allows visibility to reach beyond the confines of the wings. Average path length on a single floor gets reduced by 26% from 2.26 on average to 1.67. Integration also spreads differently and creates highly integrated centres in the middle of the wings, which could be used as anchor points to bring colleagues together.

Two caveats need to be mentioned: firstly, it would have to be assessed how an opening up would adhere to fire regulations (if this was to be realised) and secondly, it would have to be assessed whether more integration is in fact needed and required. Large open areas and long lines of sight certainly enable some behaviours (seeing others, bumping into colleagues, getting a sense of awareness of what is going on), but could be inhibiting to other behaviours (concentration, team identities, getting a job done).

What the analysis definitely allowed was an informed and evidence-based discussion with the architects of ERIK on the virtues and downsides of the building structure, of what could be achieved and what the hidden costs of the separating layout might be. Without having seen the building in action, we were able to advise on potential and likely effects of the building configuration.

To see or not to see – that is the question, not only when it comes to workplace design and the likelihood of colleagues being able to see other other, but also when we want to weigh our options in decision making. Being able to see scientific reasoning in workplace design can make a real difference to how we then promote forward-thinking and people-centred architectural solutions.